Quite a Vixen vom Lech-Toller Nest 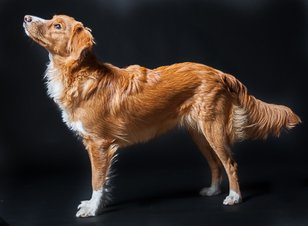 With Chili becoming older and the possibility to participate in tests was disappearing due to her whining I was thinking about getting a new dog.

During the years we have gained a better insight into the breed and we now know what we are looking for in a Toller. In this case our focus was on finding a pup of working bloodlines. I looked all over the world. At some point I contacted a Canadian breeder who approved me to a pup. However, a month before travelling to Canada to pick up the pups, some of them became seriously ill and was put down.  I wanted to breed the pup at some point and as this illeness could be hereditary I chose not to buy the pup. It was a very difficult decision as it was a great litter.

Then it was brought to my attention that a German breeder was planning an exciting litter. After having talked to the breeders, Doris and Thomas Hoffmann, it sounded as this would be the right choise for me.

When the litter was about 7 weeks old we went to Gersthofen a little north of Munich to visit the pups.   This was a very positive experience. We were very impressed with their dogs. Apart from Vixen's mother, Bella, we also got to meet Vixen's grandfather (Bella's father), Boots. Boots is a Canadian Toller who lived with Doris and Thomas for a few years and was used as stud dog. He is a absolutely wonderful male.

We picked up Vixen when she was 8 weeks old. We feared the long drive to Denmark. However, we had nothing to fear. Vixen went into the "Toller position" with her feet in the air and slept all the way home. When we stopped near the Danish border to get gas I had to wake her to take her out to pee.

Vixen still has this laid-back attitude.

Her first weeks with us were not entirely positive. Chiili and Daisy were not impressed by this new family member and they let her know. Fortunately, they came to accept her and today they enjoy each other's company.

Vixen is a wonderful dog. She is so ready when I want her to work and she works without a sound. She seems relaxed and secure in almost any situation.

Due to Vixen being such a wonderful dog with great working abilities and a great pedigree we plan on breeding her at some point. 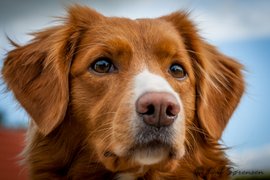 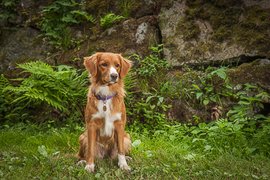 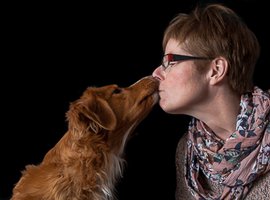 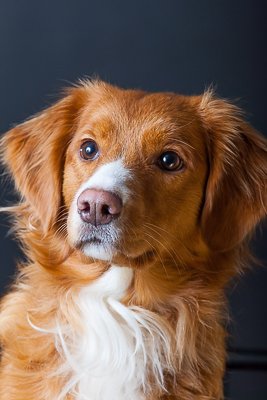