Vixen was testen on 23 February 2014 - just a week short of her 2 years birthday. This means that the test will be registered with the Danish Kennel Club.

I deliberately waited to have her tested as I felt that she has been marked by the not so friendly welcome by "the nasty aunts". This has had the effect that she meets other dogs with great wariness and submissiveness and I felt that this experience with the nasty aunts might have influenced her in other ways, too. Therefore, I didn't want her to be too young when tested On the other hand I would like to have her tested before she was 2 years old as I wanted the result to includd in the breed statistic - so now was the time.

It turned out that there wasn't that many tests to choose from this early in the year. However, I was lucky to have the Icelandic Sheepdog club give us a spot on this year's first test on 23 March.

Leif accompanied me to see Vixens reactions and to take some photos. Before it was Vixen's turn we acted as "pack" for two Icelandic sheepdogs. I was somewhat impressed to see how unaffected they were to the two frights - the overall and the noisy metal sheet. I was convinced that Vixen's reaction would be a lot stronger.

Before we started I told the test leader that I was worried about how affected Vixen would be and that they had to promise me to stop the test if they felt that she didn't handle it well.

In short, I didn't have to be nervous. Vixen did really well. She was willing to take contact to the unknown person. Of course, she wanted to play. So as to the first six points of the test she matched the desired profile of the Toller.

When it came to the "hare" chase, however, she fell outside the profile. The profile wants the dog to start and complete the chase in high speed and to take the "hare" somewhat hesitantly. I suspected that her training would stop her from chasing the hare without a "go" from me. And I was right. When I released her, she just stood there. When the test leader took a step forward to make her go, she took a few steps, turned around and looked at me. The second attempt was the same - even though I had her on my right side this time. I have no doubt that a quiet "fetch" from me would have send her galloping after the "hare". However, this is not allowed. So I have to live with the fact that she deviates quite a lot from the profile. This is the risk when testing a dog that has been trained. However, I am not at all worried that she hasn't got what it takes. I know that she has it!

Next exercise was "activity" which is actually no activity for three minutes. She did well. Most of the time she just stood there. The rest of the time she was sniffing and nibbeling the grass. Not once did she seemed stressed.

Then it was time for Mr. Overall. I was sure she would react strongly, but I was so wrong! Of course, she was scared when the overall went up. However, not as scared as I expected. She had one evasive reaction but without turning away from the overall. However, she did not want to say hello to Mr. Overall before I stood in front of it. I was happy to see, that it didn't take her long to abreact on this experience.

She displayed almost the same reaction with the noisy metal sheet. The test leader told me that had he waited a few secunds to tell me to go up to the metal sheed she would have gone herself. Again a great abreaction although she was a bit more affected this time.

Then it was time to meet the two ghosts. My little fox was so on her toes and she told them off. At first, she went behind me but not for long. The rest of the time she stood in front of me barking at he ghosts. However, she did not want to say hello to them until I was in front of them. When she had greeted them she lost interest.

Last point on the agenda was the shoots. The first two were fired while I was playing with her and the last two while we were both standing still. Both times she reacted but not in a negative way. One could see that she isn't deaf. When we played, she stopped when she heard the shot but quickly returned to play. When we stood still she was not at all affected.

All in all it was a great experience and I am so happy that I misjudged my little fox cub. Apart from hunting the "hare" she is very close to the desired profile. And I know that she has  the hunting part in her. 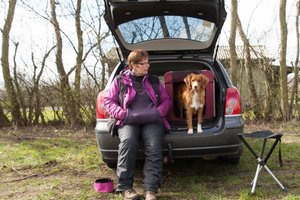 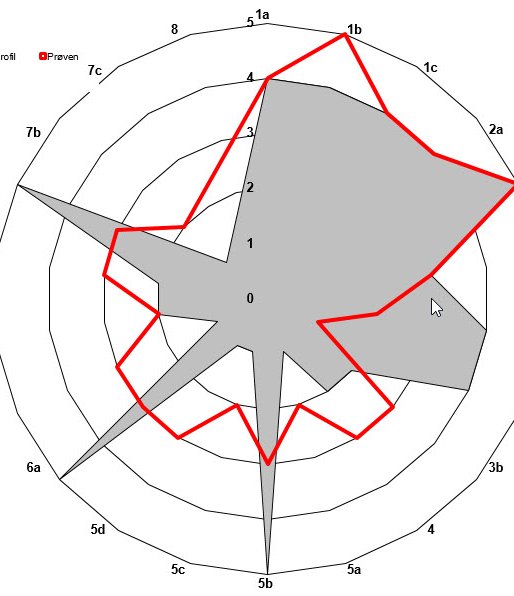