On Saturday 22 October 2005 we went to Sealand to do Chili's mental behavior test. Even though it was arranged by the Danish Toller Club only four of the eight dogs were Tollers. The other dogs were boxers and rottwerilers.

The test was performed in a wonderful area. The weather was a typical for the time of the year: Cold, windy and with showers. The trees were dominated by the golden colours of autumn.

Chili was third dog to be described and we were asked to attend at 9 o'clock to act as pack for the dog being assessed. In the morning we discovered that Chili had come into heat. This meant that she was the last dog to be tested to not ruining the test for the male dogs.

We chose to stay and see the other dogs being tested and it was really interesting. In some areas the difference between the different breeds was significant - mostly in their reaction towards the different surprises and not least how they abreacted.

Before the test I completed a form with my guess to her reactions - and I learned new things about my dog! I was especially happy about her ability to abreact and the fact that she could remain calm and guiet during the part called "Activity level".

I am not able to assess whether the desired profile set by the Toller Club is the right one. In some of the elements I find that the profile should be different. However, this does not alter the fact that I find it very interesting to have my dogs  tested. This is a useful tool for both breeders and everybody else as you get an insight into your dog's reactions.

The result of the mental behavior test 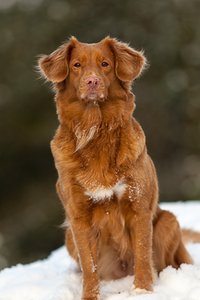 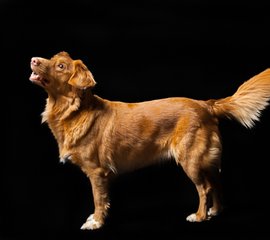