Daisy was tested on 9 September  2006 in Ulvedal. The test was arrangend by the Danish Toller Club.

The test took place in the woods. All in all 10 dogs were tested - 5 in the morning and 5 in the afternoon.

Daisy was the first dog to be tested. I tried to  imagine her reactions before the test, but she took me by surprise. The table shows how wrong I was.

The other handlers had to be the tested dog's pack to give the dog somewhere to find support should it become insecure.

It was a very educational day where you got to learn a lot about your dog and learn to appreciate how wonderful our dogs are. However, again it showed that our breed is easily stressed and subsequently difficult to make less stressful. This is something we need to be aware of when handling our dogs. Especially when training we need to consider what we expose our dogs to and which signals we send them.

During the test the test leader realized that Daisy is a very obedient dog. She did not instinctively hunt the "rabbit" but waited to be sent by me. She was excited by the shot as she properly thought she was goint to be sent to retrieve a duck.

All in all it was a test where I learned a lot of new things about Daisy.

The reslt of the test 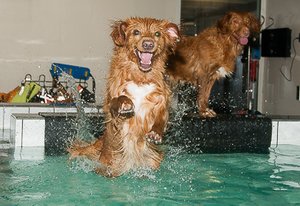 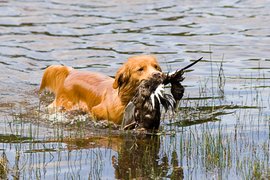